There is much confusion today about whether EB-5 investors’ funds must be “redeployed” if it’s repaid to the new commercial enterprise before the investor’s Form I-829 is approved removing conditions on residency.   The August 10, 2015 USCIS Draft Memorandum,[i] while clearly well-intentioned, contained ambiguities leading some to conclude that so-called “redeployment”  is required.  This article analyzes the EB-5 law of investment.  I conclude that there is no “redeployment” requirement in the law, regulations, or Matter of Izummi.   To my reading, there is also no such requirement in the August 2015 Draft Memo, except in the case of job creation failure.  Re-using repaid EB-5 proceeds after business plan execution may in certain instances, however, be prudent if consistent with underlying agreements, disclosures, fiduciary responsibilities and other applicable requirements, though not required under immigration rules.

EB-5 immigration has three phases.  First phase is petition for approval for EB-5 classification.  This petition is the Form I-526.  The second phase is application for immigrant visa.  When approved and the investor is admitted to the U.S., he begins a two year period of conditional residency.  The third phase is petition for approval of removing conditions on residency filed toward the end of the two year conditional period.  Each phase has separate, distinct requirements set out in statute, regulations, and policy.

For EB-5 classification approval under the statute, the investor must prove (1) investment, (2) in a new commercial enterprise, that (3) will create jobs.[ii]   We’re concerned here with prong (1).

What is “investment” for EB-5 classification purposes? 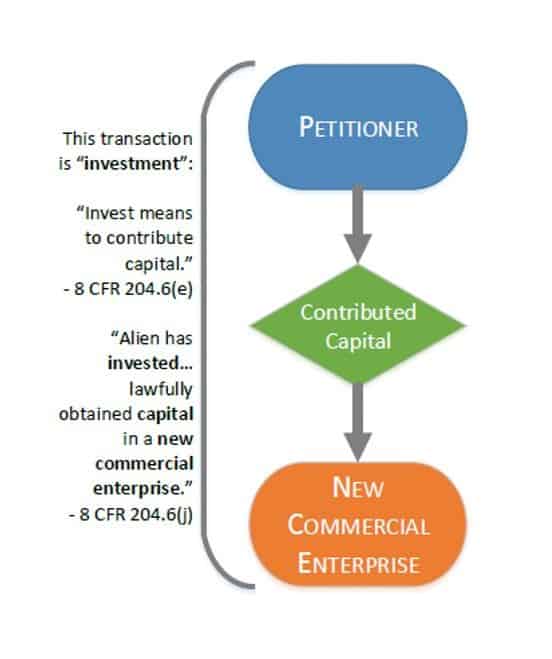 What does “at risk” mean?

An EB-5 investor’s capital must be “at risk.”  This isn’t in the law but rather in the regulations.[iii]  The “at risk” test functions to ensure that the investor has “invested” in the way Congress wanted for EB-5 visa qualification purposes, because indeed, investment can otherwise mean a lot of different things.  The regulations say that to get his I-526 petition approved, the investor has to show USCIS that he has put his “capital at risk for the purposes of generating a return on the capital placed at risk.” Congress wanted EB-5 investors to be interested in whether the business does well or not with the associated upsides and downsides.[iv]

This is confirmed in Matter of Izummi.[v]  Izummi is a 1998 precedent decision that animates USCIS scrutiny to this day, 20 years later.[vi]  Critical to our discussion here, Izummi is an I-526 eligibility decision, not an I-829 eligibility decision.  Izummi’s holdings apply to whether the investment meets requirements for EB-5 classification, not removal of conditions.

Investment “at risk” now put in proper context – at I-526 eligibility – let’s turn to the sustainment test for I-829 eligibility.

For conditions removal approval under the statute, the investor must prove (1) sustainment of investment, and (2) completed job creation, or job creation within a reasonable time.   We’re concerned here with prong (1), this time of I-829 eligibility.[vii]

What does it mean to “sustain” the investment?

That doesn’t mean it’s easy to establish I-829 approval eligibility.  The work is mostly in prong (2), proving job creation, or harder still, future job creation within a reasonable time if not all the jobs have been created.  But satisfying prong (1), sustainment of investment, is simple though prolonged:  let nothing – loan maturity, prepayment, dividends from job creating entity — result in investor being redeemed out of the new commercial enterprise before the end of the “sustainment period.”[ix]

Does this sustained investment have to be “at risk”? If so, does this require “redeployment”?

But let’s assume that it’s permissible to read the “at risk” test into the sustainment requirement for removal of conditions.  What would that require?

It would require that the investor not have changed his investment relationship with the new commercial enterprise so as to eliminate the “at risk” aspect of his initial investment.  That is, the new commercial enterprise partnership or operating agreement should continue meet all the requirements under the statute, regulations, and Izummi in all its many facets, containing no impermissible redemptions, no guarantees, no reserves, no payment of partnership expenses and so on.

That would all be fine, and in fact, is the advisable manner to maintain the investment relationship between investor and new commercial enterprise.

Number two, Izummi is concerned with ensuring that the money goes where it should to create jobs.  EB-5 capital has to be made available to the entity most closely responsible for job creation under Izummi.[xi]  Now I have reasoned elsewhere that this rationale, though understandable, muddies the “at risk” analysis because it mixes the investment (prong 1 for EB-5 classification) with job creation (prong 3 for EB-5 classification), each of which has entirely separate evidentiary tests.[xii]  While untidy in this regard, Izummi prohibits allowing the new commercial enterprise to use EB-5 money for partnership expenses or to sit idle in reserves because it wants the money used for the job creating entity.  Once the full amount of capital has been made available to the job creating entity, Izummi does not further require that the money be put to another round of use.

The Draft Memo sensibly says that when the business plan is fully executed and job creation is complete, the new commercial enterprise may redeploy and not suffer material change finding:

The Draft Memo makes clear the same applies if there’s repayment as long as, again, the business plan is executed and jobs created:

“if the investment was directed to a job creating entity undertaking the project presented in the initial filing, the requisite number of jobs were created according to the plan presented with the Form I-526, and the loan made to the job-creating entity was repaid to the new commercial enterprise, the new commercial enterprise may redeploy such repaid capital in another ‘at risk’ activity without causing the petition to be denied or revoked.”[xiv] (Emphasis added.)

Again, I wish the authors of the Draft Memo had omitted the phrase “at risk” in these contexts, as it is misplaced in discussing post-investment scenarios and has caused much confusion.  The sentences should, in my view, simply read “new commercial enterprises may redeploy the capital in another activity” full stop.   But the point is, the Draft Memo would allow, though clearly not require, the new commercial enterprise to reuse the EB-5 proceeds during the sustainment period as long as the jobs are created and business plan executed.

The big caveat in any discussion of the Draft Memo is that it is not policy yet, therefore doesn’t tell anyone what is and is not permitted.   Having tried to guide many project clients through the important business questions of how long should an EB-5 loan term be, what to do when the note matures, whether a borrower may prepay and under what conditions, whether there is a redeployment requirement, what uses would be permitted upon redeployment, among many others, final guidance consistent with the framework of statutory definition of investment is very much needed.

We’ve assumed to this point that all had gone according to the business plan.  What happens when things go south and job creation is disrupted or aborted?  To my reading, this is when the Draft August 2015 Memo does require redeployment.

I believe that the insertion of the term “at risk” should have been “job-creating.”  But the point is that this is the occasion when the new commercial enterprise would be required to put the EB-5 proceeds to another round of use.  This makes good sense assuming that not all the required jobs had been created when the derailing event happened.   In that scenario, the new commercial enterprise shouldn’t simply sit on the recovered funds, but spend it on another job creating activity to keep it viable for EB-5 immigration.

Note that redeployment in this instance may suffer from a material change determination, unless the business plan changes occur after investors’ admission in conditional residency status.

We are all wondering what the new commercial enterprise may do with funds repaid before investors’ I-829s come due.  The period between repayment and investor redemption after conditional residency may span years due to EB-5 visa backlog.

This article offers hopefully a clarifying viewpoint that redeployment is not required under existing EB-5 immigration authority for investors to sustain their investment for I-829 approval.  Reuse or depositing in a safe, responsible manner may, however, be prudent new commercial enterprise management as long as consistent with all other applicable requirements.

* Carolyn Lee is the Founder of Carolyn Lee PLLC. She is Chair of the American Immigration Lawyers Association (AILA) National EB-5 Committee and serves as Legislative Counsel to Invest in the USA (IIUSA). She has represented U.S. developers and regional centers across the U.S. and thousands of EB-5 investors in the past 15 years. She is an advocate for long-term reauthorization and expansion of the EB-5 program. Copyright reserved.

[iv] See Letter from U.S. Senate, Committee on the Judiciary, Subcommittee on Immigration and Refugee Affairs, to Gene McNary, Comm’r, legacy Immigration and Naturalization Service (INS) (Aug. 2, 1991), commenting on the proposed EB-5 regulations (“We agree with the thrust of the proposed regulations that the alien must have a personal stake in the long range success of the enterprise and be willing to suffer a loss if the business fails. We do not believe that the investor should qualify merely by loaning money to the new enterprise, nor do we believe that the investment should be raised by securing a loan against the assets of the U.S. company. In short, we expect the investor to put his money at risk.”).

[ix] The June 2017 version of this article had the following footnote: “Note that there is an open question about the duration of sustainment, whether it should be the two years of conditional residency, or two years of conditional residency plus the entire period of I-829 adjudication until approval.” The June 14, 2017 Policy Manual update memorializing the redeployment policy answered this question

Carolyn Lee has vast experience in EB-5 representation and has served as industry leader and EB-5 commentator for over a decade. She is Chair of the American Immigration Lawyers Association (AILA) National EB-5 Committee. She has steered clients through the most dynamic period of growth in EB-5 program history and is an advocate for long term reauthorization and expansion of the EB-5 program.